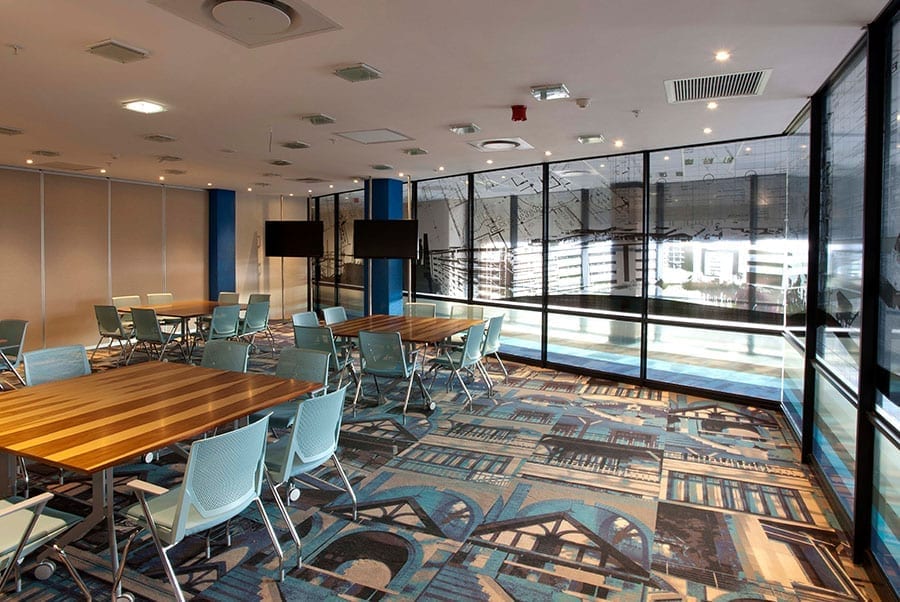 Kevin Bates Flooring & Carpeting supplied and installed bespoke floor covering, especially designed by Ege, one of Europe’s leading carpet producers based in Denmark, for the restoration and redecoration of the historic Wanooka House, which forms an integral part of KPMG’s multi-million rand new East Campus in Parktown, Johannesburg.

Kevin Bates Flooring & Carpeting has over the past few years supplied all the carpeting for the prestigious and high-profile KPMG headquarters on Parktown Ridge, with the highly unusual and innovative Ege carpet tiles recently supplied for the new Wanooka House and office complex that form part of the East Campus, particularly noteworthy.

The interior designer for the prestige project being implemented by developer, Old Mutual Property, was Stuart Cloete of Plan IA; the architects were Impendulo Design Architects; and the main contractor, Stefanutti Stocks.

Brandon Park, Sales Director of Kevin Bates Flooring and Carpeting, says the company supplied about 30 000sq m of carpeting in total for the entire KPMG head office campus project, of which 14 000sq m was The Netherlands-designed and -developed Interface carpet tiles (rated as a global frontrunner in sustainable floor coverings) which were installed from the outset of the project in the KPMG Crescent head office building; and around 8 000sq m of the Danish Ege bespoke carpet tiles, produced and especially designed for the latest phase, for installation in the restored Wanooka House in St Andrew’s Road and pedestrian bridge that links it to the KPMG main complex. The overhead bridge crosses Jan Smuts Avenue to the KPMG offices at 85 Empire Road.

Wanooka House, now utilised by KPMG as an executive entertainment area, was built in 1902 and for the first half of the 20th Century was home to a succession of senior executives of the Central South African Railways. The first one-, and later two-storeyed Tudor-gabled Edwardian mansion is revered by historians as ‘The Grand Lady of Parktown’ and its restoration and new application by KPMG had to be approved by heritage preservation agencies – as well as concerned Parktown residents.

Stuart Cloete of Plan IA, in his specification of the flooring for the refurbished Wanooka House, said he was keen to provide a link between the two KPMG campuses, and illustrate the history of both Wanooka House, and the growth of KPMG Johannesburg and the area in which the company’s new headquarters are situated. “Ege Carpets, which has the slogan ‘we create more than carpets’, proved true to their word and provided the solution. The company was able to reproduce digital photos in carpet tiles from a wide selection of pictures Kevin Bates and my consultancy selected and e-mailed to Ege in Denmark. Finalising the design called for close liaison over a period of more than two months with the Danish carpet designers but the end-result – incorporating, for example, visuals of Wanooka House, aerial and terrestrial views of the area around it, and the KPMG logo – was exactly what I was looking for,” Cloete explained.

The bespoke Ege carpet tiles were used in the new campus walkways and on the bridge that links Wanooka House with the KPMG Crescent building, the cornerstone of the new KPMG headquarters.

Kevin Bates’ Brandon Park says although the KPMG Ege carpet tiles are entirely unique and tailor-made, the concept of bespoke design was derived from Ege’s Modular Shuffle/City Scapes concept, which offers richly patterned designs as alternative to the more subdued, classical modular products available. City Scapes’ distinguishing feature is its subdued, tone-on-tone colour themes ranging from greens over blues and purples, to browns, and neutral shades of greys and beiges.

“The shape, size, and joins of the Modular Shuffle carpet tiles are used as integrated parts of the design, and are essential elements in the creation of random and unique design expressions on the floor. Because of the distinctive design and manufacturing process, each Modular Shuffle tile is unique and differs from tiles surrounding it. When mixed – or ‘shuffled’ – together and ostensibly randomly installed, the tiles create remarkable floorscapes without any repetition.”

Designer Stuart Cloete added: “The new offices of the KPMG East Campus were designed to be ‘fun places’ to work in. Splashes of colour were added against a very neutral architectural pallet, and areas were designed to allow the user to choose the space he or she wants to work in. It was very gratifying to be given free designing reins by the client and I believe as a result the design, and the choice of carpeting, have combined to provide KPMG with a building that represents a truly great – and unique – working environment.”