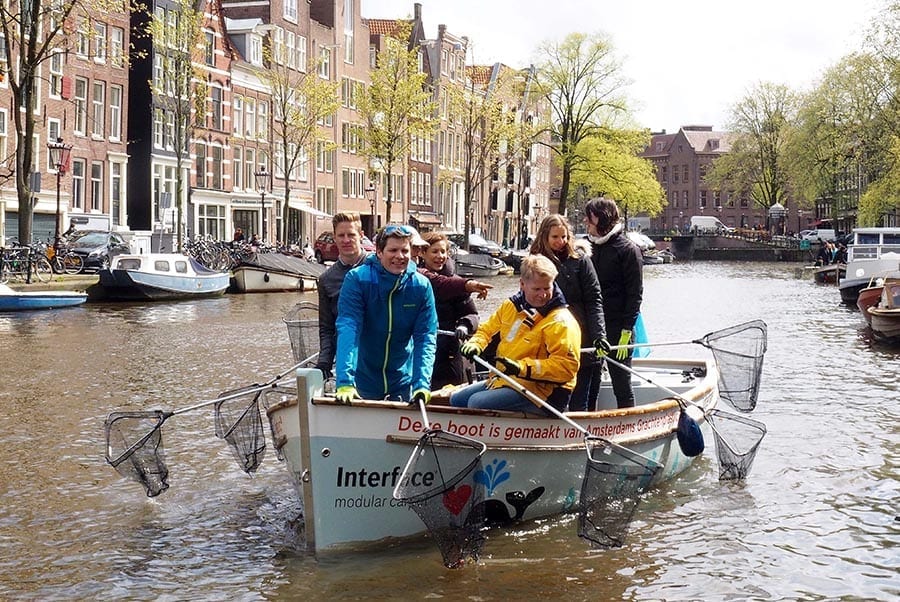 Building boats from plastic litter – to ‘fish’ for more waste!

Interface, the world’s largest modular flooring producer, is participating in an innovative initiative to eliminate plastic litter from the canals of Europe.

Johannesburg and Cape Town-based KBAC Flooring is the sole South African distributor of Interface carpet tiles which have set a global benchmark in the ‘green’ production of flooring. Interface’s main European production plant is at Scherpenzeel in The Netherlands.

Interface recently announced that it had formed a partnership with the Plastic Whale movement which has as mission utilising some of the million pieces of plastic debris floating in European waters to build a fleet of plastic boats from which the litter will be ‘fished’. Fishing trips are, for example, being organised as tourist offerings, presenting eco-minded visitors with the opportunity to sail the canals in the plastic boats and see the sights of Amsterdam while scooping plastic litter from the water.

Lesley Fidrmuc, KBAC’s Interface Consultant, says Interface has worked with Plastic Whale to design and build its own unique boat made from nearly 7000 of the over 50 000 plastic bottles already fished from the canals in Amsterdam. “The boat is being used daily to fish waste out of the water systems and put a spotlight on the dangerous polluting effects of plastics in water,” Lesley stated.

The new Plastic Whale collaboration complements Interface’s existing environmental programme, Net-Works, an inclusive business partnership with the Zoological Society of London (ZSL) launched in 2012. Designed to rid the oceans of discarded fishing nets and draw attention to the harmful effects plastic waste has on marine life, Net-Works has already removed over 80 000kg of discarded fishing nets from the ocean and coastal areas in the Philippines.

“Now, through its partnership with Plastic Whale, Interface will be taking a holistic approach to reducing marine waste in both oceans and rivers. Plastic Whale has already collected well over 100 litres of plastic bags and waste from the canals of Amsterdam alone,” Lesley adds.

Rob Boogaard, CEO and Vice President of the Interface EMEA (Europe-Middle East-Africa)operations, explains further: “Plastic bottles floating in the canals of Amsterdam, and fishing nets littering the vast shorelines and beaches of remote fishing communities in the Philippines, are just two of many examples that illustrate that plastic waste is a challenge of global proportions. As part of our highly successful Net-Works programme, Interface has fervently taken on this challenge for several years now. Our partnership with Plastic Whale advances our commitment further and will hopefully encourage many others to clean up the world’s waters and turn waste into value while securing the future of our eco-system.”

The partnership with Plastic Whale follows several other noteworthy ‘green’ moves by Interface in the past year or two. Recycled automobile windscreens are, for example, being used at the Scherpenzeel plant as manufacturing raw material for carpet tile production and the company – which now uses 45% recycled or bio-based raw materials – is also drawing energy from biogas derived from chocolate and fish waste, as well as converting old fishing nets into yarn, and using castor beans to reduce its dependency on oil for carpet production.

Interface was one of the first global companies to publicly commit to sustainability when it made a pledge in the mid-90s to totally eliminate any negative production impact on the environment by 2020. Known as ‘Mission Zero’, the campaign influences every aspect of Interface business and inspires the company to continually push the boundaries to achieve its goal.

Interface is now more than half way to reaching Mission Zero and has been widely recognised for its achievements to date.  Its products have also achieved several awards, specifically for design and innovation, the most recent being Athenaeum Good Design Awards for Interface’s Fotosfera and Urban Retreat ranges. The Good Design Award is the world’s oldest and most important industrial design programme, organised annually by the Chicago Athenaeum Museum.