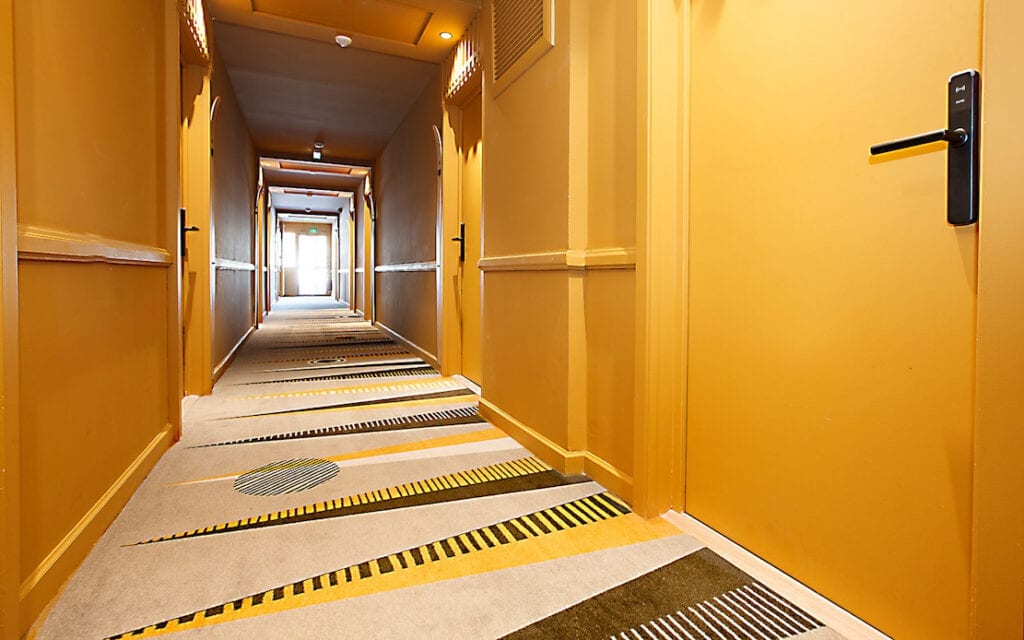 Danish carpet producer, Ege Flooring, provided stunning custom-made carpets for the colourful corridors of the new La Folie Douce Hotel in Chamonix in the French Alps. It’s been said these are passages that go “Wow” –  and it’s not an understatement.

Ege Flooring is distributed in South Africa by KBAC Flooring. Ege is this year celebrating its 80th anniversary and KBAC, 50 years of operations.

Famous since 1969 for its trendy and lively French après ski bars and entertainment venues with over-the-top staff costumes, La Folie Douce (French for “sweet madness”) opened its first hotel in December last year, selecting the skiers’ paradise Chamonix – near the junction of France, Switzerland and Italy – as venue. The resort town is spectacularly situated at the base of Mont Blanc, the highest summit in the Alps.

The ski-to-door hotel has operated in Chamonix since 1904, initially known as the Grand Palace of Savoy, but now its 250 rooms and après ski cocktail bars and restaurants have been transformed in a way that would have astounded the more conservative original early 20th Century owners. The Savoy was the first of three “palaces” launched with the arrival of the railway in 1901 but only the Chamonix Savoy survived as a hotel, spending the past 40 years as a Club Med resort until closing in April 2018.

La Folie Douce has set out to strike the right chord between fun and functionality in its first hotel and the historic Savoy Palace has been reinvented – inside out. Transforming the traditional concept of its ski resorts, the new hotel challenges all the codes for the European hospitality industry. In fact, London’s Financial Times has called it “the most unusual, most exuberant hotel in the Alps as well as a potential game-changer for the wider ski industry”.

The interior design for the hotel is indeed unusual to say the least: stuffed hedgehogs on walls, an old wooden confessional in a corridor, walls and ceilings stripped bare to unashamedly reveal concrete and bricks, and live installations such as a sequined acrobat performing in swirls of silk in the atrium.

However, perhaps the most eye-catching of these spectacular design revamps are the Ege custom-made corridor carpets that add a strong identity to each floor with varied designs, strong graphics and bright colour codes. The motives are inspired by the local mountain fauna and interpretations of the codes of winter sports. So, before hitting the slopes, the new hotel’s corridor carpets set the mood and energy level for playful days in the breath-taking Alpine scenery.

The interior designer for the new hotel is Romain Brothier and the architect, Dominique Tosiani, both of the architectural firm, Bachmann & Associes based in Dinard, France.