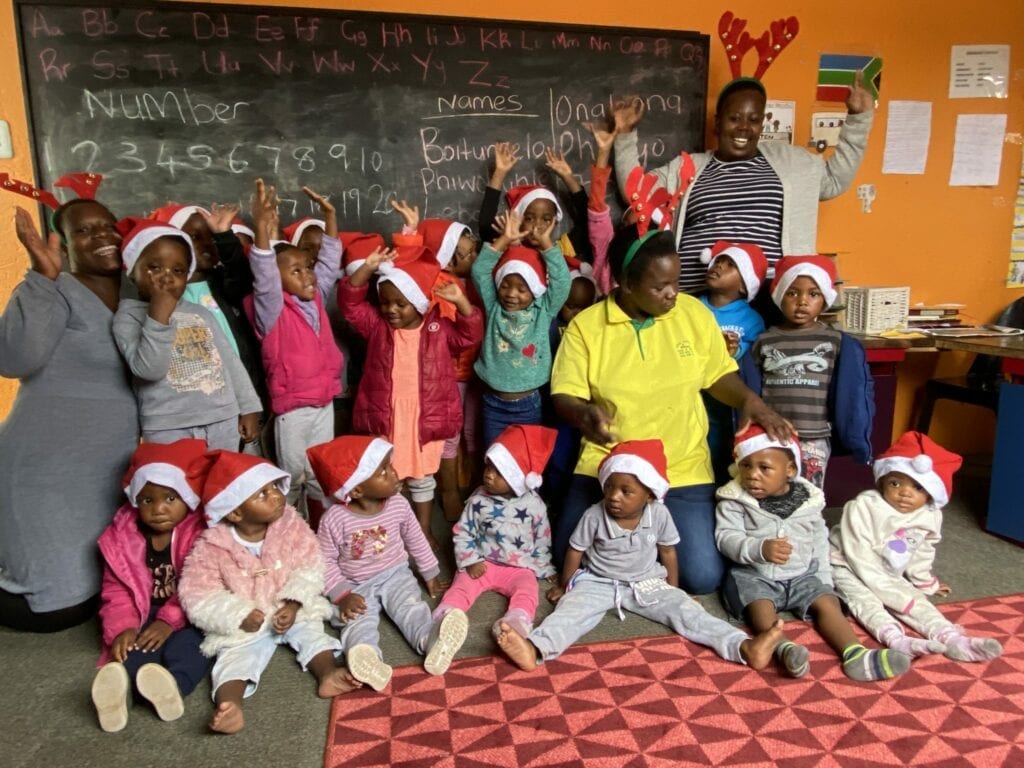 Although South Africa’s economic plights have hampered the corporate social responsibility (CSR) spending of the entire flooring industry, KBAC Flooring has in its Golden Anniversary year somehow managed to bring smiles to the faces of dozens of disadvantaged children.

It is an achievement worthwhile considering as Christmas, the time of giving, approaches.

The donations to institutions such as the Lesedi Day Care School in Alexandra, and the Truth Philippian Day Care Centre in Devland, were perhaps in pure financial terms not massive but it was the way the support was orchestrated and managed by key KBAC figures such as Finance Manager, Liezel Gagiano, that showed that this is a company that cares.

Liezel not only signs off the limited funds available for donations, she loves every minute of the joy KBAC has brought to kids from 10-months to six-year-old at Lesedi, to give just one example. In terms of KBAC’s “Economic Development Agreement”, KBAC has brought a myriad of essentials most people take for granted to the 30 youngsters at Lesedi, all from distressingly disadvantaged backgrounds.

KBAC’s offering has included a refrigerator, stationery, books, educational material, and – especially for Mandela Day – a large blackboard to, finally, allow teaching to be carried out in an adequate manner. Now there are plans to install luxury vinyl tiling at the school to replace well-worn flooring at Lesedi during the centre’s Christmas holidays and KBAC has also managed to find some artificial grass flooring to lay outside to provide more comfortable seating for the kids during class breaks.

Liezel’s compassion and caring for the Lesedi facility comes across clearly when chatting to her.

Through regular meetings with the facilitators at the day care school, she has led KBAC on that extra mile to see that all the kids feel loved: like selecting drawing materials only after personally trying it out at the art shop first, seeing that the varying ages of the youngsters are catered for with suitable reading matter and colouring books, and organising a “graduation day” for the pupils preparing for proper schooling.  She saw to it that KBAC not only provided sponsorship for this big occasion but personally supervised the banners, and commemorative package of “goodies” for each child on that millestone day in their lives.  In return, the pupils – in chorus – recited a poem of heartfelt thanks which brought tears to Liezel’s eyes and warmed the hearts of KBAC management when she reported back.

The love that KBAC poured on Lesedi typifies the company’s policy of not just routinely making corporate social responsibility donations but rather becoming part of the growth and sustenance of the few institutions the company’s budget currently allows for.

Sometimes, motivation comes from unexpected sources like when Betty Mabuza, who serves tea with a smile to KBAC staff, raised the plight of 60 equally disadvantaged children in Devland, who had to cope with cold and bare concrete floors at the Philippian Day Care Centre in Freedom Park. KBAC stepped in to provide broadloom carpet off-cuts which were cleverly cut into tile-shapes by passionate KBAC installer, Hloni Magubane, and his team who then installed the bespoke tiles in a most innovative fashion to give the facility a one-of-a-kind flooring.

Here again the smiles on the kids’ faces brought lumps to the throats of KBAC personnel.

KBAC’s Cape Town operations this year also lent a helping hand by making a substantial financial donation to the Mandela Day “Go for Gold” initiative. Go for Gold was founded in 1999 through collaboration between companies in the Built Environment, the Western Cape Department of Education and Civil Society, to help students from under-privileged communities to enhance their education and transition through an internship year and onto tertiary education with guaranteed employment once they graduate.

The KBAC philosophy of helping wherever possible, financially – and in kind – to worthy causes, is one KBAC fervently believes in within budgetary constraints, says the company’s Financial Director, Ashleigh Keefer. “Our budget this year has been severely hampered by the slump in the economy but we believe – as Nelson Mandela did – that by giving the young a chance in life we are investing in South Africa’s future. If only funds were available to do more,” she reflects.