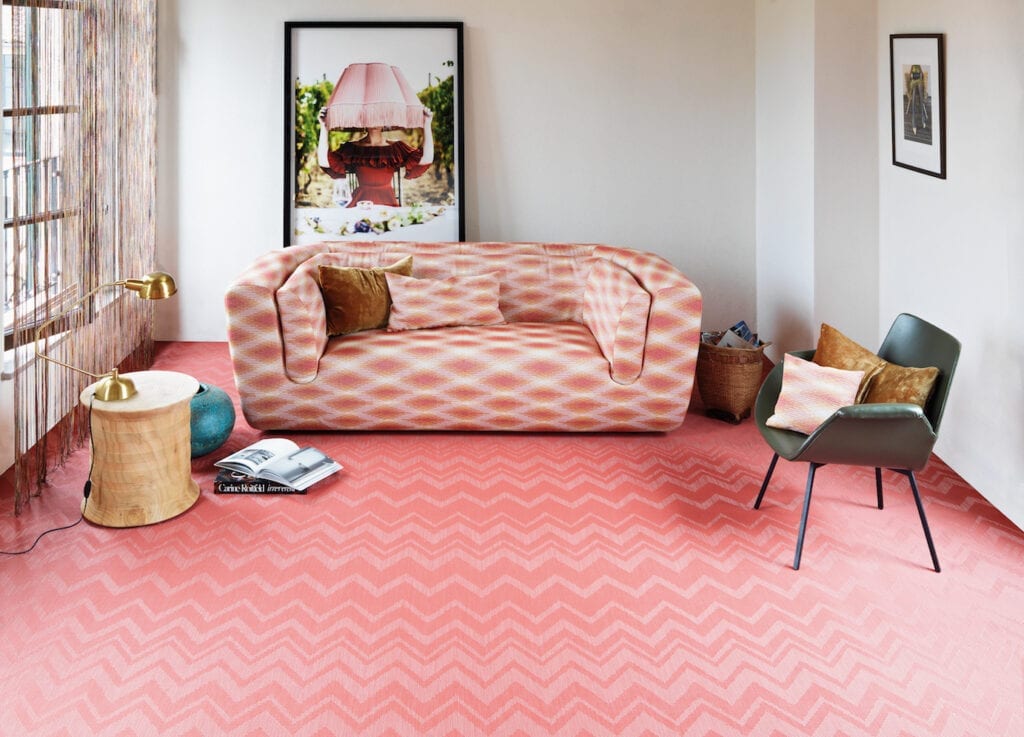 Swedish flooring producer, Bolon – a world leader in woven vinyl flooring – has announced the launch of a new range: the Missoni Home collection which is the next development of the highly successful Bolon collaboration with acclaimed Italian fashion and design house, Missoni, based in Varese.

Bolon, founded in 1949 by Nils-Erik Eklund, invented and pioneered the woven vinyl flooring concept. The company is represented in South Africa only by KBAC Flooring which is this year celebrating its 50th anniversary.

In 2012, at the Salone del Mobile Bolon and Missoni first collaborated at the Salone del Mobile when co-hosting the global presentation of their joint collection, Missoni Home, with a forest-inspired installation called ‘Bois de Bolon´. In 2013 and 2015, when the second and third Missoni Home collections were launched, came the introduction of the now iconic Missoni Zig Zag pattern in the flooring. The Missoni Home collection consists of 13 designs: Optical, Flame, Flame Patch and Zig Zag in a wide selection of colours now augmented by Missoni Home with its 10 new designs showing the sublime combination of the Missoni art, design and craft and Bolon quality flooring.

* Fireworks:  inspired by one of Missoni Home’s signature fabrics, the new pattern features a strong graphic black-and-white pattern with a flowing gradient.

In addition, the Missoni Home – Zigzag collection is now available in three new colours: Turquoise for a strong visual character, Green for a natural vibe, and Red to give any space a new lift.

And, in two other new developments, the Missoni Home – Flame collection is now produced in the very popular Pineapple colour and Missoni Home- Flame Patch in three brand-new colourways: Lagoon, Wood and Black.

All designs are available as a roll except Flame Patch which comes in 50×50 cm tiles.

“Bolon’s latest innovations, such as the multi-coloured Trinidad and black-and-white Fireworks – inspired by the space-dyed fabrics of Missoni – offer additional unique touches to a collection that reflects the distinctive characteristics of Missoni,” says Rosita Missoni, co-founder of Missoni, while Annica Eklund, Bolon Chief Creative Officer, adds: “The Missoni Home collection is an eye-catching explosion of colours that will add a distinctive look to any interior project.”

The Missoni Home range has been hailed globally and can be seen at several ritzy hotels, offices, shops and fairs around the world. In the last few years it has also been used as creative element in installations at the iconic Hotel Il Pellicano, on the Tuscan coast, and in the Fashion and Textile Museum in London, to name just two examples.

Bolon woven vinyl flooring contains recycled material, is easy to maintain, has a high-performance classification (“33 Heavy commercial”), and is sold with a 15-year warranty.

Now under the leadership of its third generation, Bolon celebrates its 70th anniversary this year. The family business – run by sisters Annica and Marie Eklund – has evolved and grown from a traditional weaving mill into an international design brand with clients such as Armani, Google, Four Seasons Hotels, Chanel, Adidas, Apple and Missoni. With a strong commitment to sustainability, Bolon designs and manufactures all its products at a facility in Ulricehamn in Sweden.