Inspired by the world’s most beloved textiles, the latest range of sustainable carpet tiles from Interface, the world’s largest modular flooring producer, has been launched in South Africa by KBAC Flooring, the sole southern African distributor for Interface.

“World Woven colours recall undyed wools – with just a bit of contrast. As in nature, each colour is made of many hues mingled together to create a vivid, hand-made effect. Whether used as a simple, neutral background or combined to create diversity and movement, World Woven provides designers with exciting new creative options,” she states.

Developed by Interface’s exclusive product designer, David Oakey of David Oakey Designs, the collection recalls memories of some of the most enduring textiles of the past, including the tweeds and bespoke woven textiles of Oakey’s upbringing in the UK.

“The beauty of hand-weaving is that it’s closer to nature than the synthetic uniformity of ‘modern’ machined production,” says Lesley. “In a traditional Scottish tweed, for example, what looks like solid green actually has at least 10 to 15 colours, which is similar to the way nature works with colour. Other artisanal fabrics, like the freeform weaves known as Saori, are similarly diverse.

“The World Woven Collection was inspired by this artistry found in hand-woven textiles, and lends itself to a wide range of possibilities – from a simple neutral background, or a composition of multiple textures to create diversity and movement as found in the natural world. Designers are also likely to be attracted to the collection for its residential feel, and its mix-and-match capability.”

“At the core of the World Woven Collection are four patterns that were inspired by classic woolen textiles, rooted in the traditions of plain woven fabrics made for fashion, upholstery and home accessories that are still so essential today,” Lesley adds.

The patterns for the three square tiles in the World Woven range are Collins Cottage and Scottish Sett, which both revive the houndstooth and plaid effect; while Mod Café renews the playful and optimistic patterns of the 1950s.

World Woven, as all other Interface products, are produced with totally recycled nylon in Interface factories increasingly powered by clean energy. Interface was one of the first global companies to publicly commit to sustainability when it made a pledge in the mid-90s to totally eliminate any negative production impact on the environment by 2020. Known as ‘Mission Zero’, the campaign influences every aspect of Interface business and inspires the company to continually push the boundaries to achieve its goal.

Interface is now more than halfway to reaching Mission Zero and has been widely recognised for its achievements to date.  Its products have also achieved several awards, specifically for design and innovation, the most recent being the Athenaeum Good Design Awards received earlier this year for Interface’s Fotosfera and Urban Retreat ranges. The Good Design Award is the world’s oldest and most important industrial design accolade, presented annually by the Chicago Athenaeum Museum. 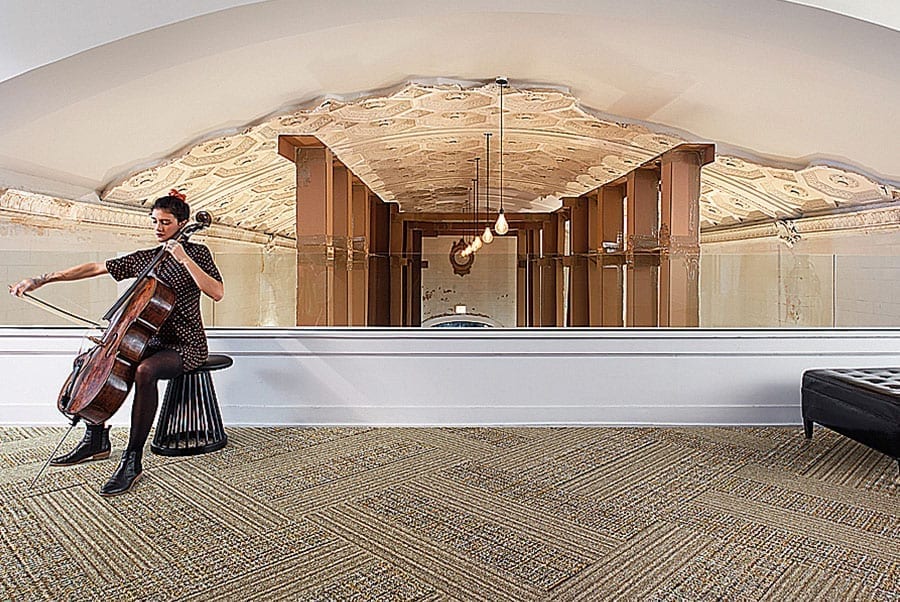